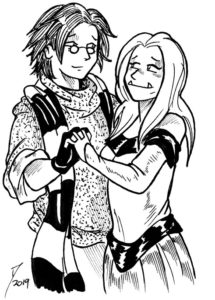 "Dominic Deegan: Oracle for Hire" tells the story of Dominic Deegan, a grumpy seer who uses his gift of visions to change the future.  His visions take him to Travoria Castle where he meets Luna Travoria, the deformed sorceress who would change his life forever.  It also tells the stories of a crippled healer, a necromancer, a cursed swordsman, Dominic's famous parents, a pair of bumbling thieves, a scholarly werewolf, orc nature wizards, and many others.  No one remained the same after meeting Dominic Deegan, and he was changed for knowing them.

The Legacy of Dominic Deegan is set 200 years after the events of Oracle for Hire.  A deaf mongrelman called Snout stumbles upon a mysterious scrap of paper, and his curiosity drives him to search for clues regarding an obscure librarian from a centuries-old city across the world.  Snout must determine if he can trust what he sees, reads, and learns in his quest for the untold fate of Dominic Deegan.

Note:  This entire story is told from Snout's perspective, so there will be no dialogue on any page.